A fully qualified insured coach who is passionate about building the confidence, self-belief, suppleness and strength of both the horse and the rider.

I just wanted to let you know how much I enjoyed last weekend’s stay at your property in Keysbrook. The weekend included all my favourite things; learning with my horse, END_OF_DOCUMENT_TOKEN_TO_BE_REPLACED

Just wanted to say a BIG thank you to you for hosting Rachael and myself. The food and accommodation were really good and I really appreciated you catering for a vegetarian. END_OF_DOCUMENT_TOKEN_TO_BE_REPLACED

I just wanted to drop you a line to say a huge thank you for your time and inspiration at the weekend. END_OF_DOCUMENT_TOKEN_TO_BE_REPLACED

Just wanted to say thanks to you and Jenni for all of your efforts and encouragement this week. And love the way you both make me (and no doubt everyone as individuals) feel special and supported in our riding END_OF_DOCUMENT_TOKEN_TO_BE_REPLACED

In New Zealand we have been fortunate enough to have Ann hold clinics twice a year for the last two years. In that time, the improvement in my riding, and as a result my horses way of going, has been dramatic. END_OF_DOCUMENT_TOKEN_TO_BE_REPLACED

Thank you Ann, I am still feeling slightly teary as I reflect on the impact of the clinic. My legs are buzzing from knicker tendon to toes and I now have some serious strengthening to do over the next few months (for my darling horse I will do it) END_OF_DOCUMENT_TOKEN_TO_BE_REPLACED

Ann Montgomery has been my riding coach for the past seven years. During this time she has not “taught” me how to ride, instead guiding me on a journey where I continue to develop a sense of feel and awareness of both my own body and that of my horse. END_OF_DOCUMENT_TOKEN_TO_BE_REPLACED

I found your lessons to be so helpful and enjoyable. I have continued to try and concentrate on my position and yesterday Dee struck off on her left canter the first time I asked for it. This is such an exciting development for us, that I cannot find the words….. END_OF_DOCUMENT_TOKEN_TO_BE_REPLACED

Ann’s RWYM teaching method has helped me gain a greater understanding of the “how”, helping me identify my weak spots and improve my riding skills in a constructive manner. She has helped me to join the dots, and consolidate threads of my knowledge into a more solid foundation from which to progress. END_OF_DOCUMENT_TOKEN_TO_BE_REPLACED

Ann always focused on furthering my riding career and equine education whenever she could. She was sensitive enough to notice when my confidence took a knock; END_OF_DOCUMENT_TOKEN_TO_BE_REPLACED

How I wish that I had found Ann and RWYM many years ago, I feel so lucky that she is not too far away! END_OF_DOCUMENT_TOKEN_TO_BE_REPLACED

Testimonial from Joanne and Little Geoffery

I just wanted to say a big thank you for the great lesson yesterday
It was great getting all the feedback
and seeing the comparison video,that really hit home about it all. END_OF_DOCUMENT_TOKEN_TO_BE_REPLACED

I honestly can't even begin to express how much your support and encouragement means to me and how much it has elevated my confidence and try. END_OF_DOCUMENT_TOKEN_TO_BE_REPLACED

A forever student, who hopes never to stop learning, my search for knowledge has been as much about my own riding, as that of my students, so I have a great empathy for mindful riders who are striving to be best version of themselves that they can be. 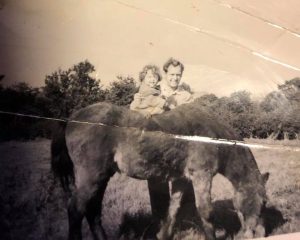 This was the ignition of my passion and future, a wonderful day for me and a day to regret by my Dad

As I grew up I did not have the luxury of my own pony so I borrowed a friend’s pony while she was at boarding school.  Only when I was 16 did I save up enough money to buy one of my own.  By the time I was 23 years old I was married and my husband and I moved to South Africa.  We bought a 20-acre property and this is where I first started coaching and running a Livery yard.

In 1984 I returned to the UK to obtain my British Horse Society Horsemaster Certificate.  In the years that I lived in South Africa, I coached lots of riders and had pupils competing successfully and being selected for the inter-region and inter-provincial teams. 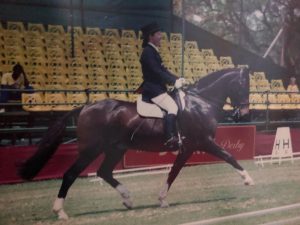 This was Hurricane, he started a massive change in my riding and knowledge.

I competed successfully to Elementary-Medium on a number of horses of different breeds and types and became a South African National Equestrian Federation Level 1 Coach in 1992 and a Level 2 Coach in 1994.

I owned and operated a riding school and 25-stable barn for a number of years in South Africa while I was studying for my SANEFF qualifications.

In 2003 I was introduced to Mary Wanless’ work on the biomechanics of the rider.  I felt that this was what was lacking in my coaching, so again I travelled back to the UK to work with Mary and do coaching courses using her methods.  In 2004 I qualified as a Ride With Your Mind™ coach. 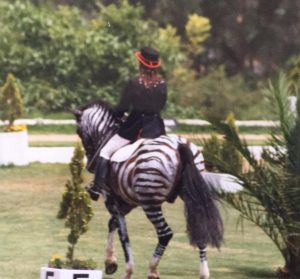 I am very grateful to Caroline Potts who sold him to me, coached me and painted him for a fancy dress charity freestyle competition where we performed to African music.

In 2004 the four of us (my husband and two sons) moved to Australia where I continued my riding and coaching.  In 2005 my qualifications were recognised and I got my NCAS Level 2 General Coach accreditation.

All my students are a delight to coach and I have had a number of children qualify for the WA Interschools teams, many of whom have travelled to the Eastern states for National Championships.

I have been an official Dressage judge since 1996 and in 2007 I upgraded to an NOAS EA D Level Dressage Judge.  In 2014, after 18 years, I decided to retire.  This was not an easy decision, but increasing coaching commitments made me realise that this was where I was needed most.    It’s where my true passion of helping horses and riders truly lies.

Mindful of the need to remain abreast of emerging techniques, knowledge and skills, in 2009 and 2011 I travelled back to the UK to do an update on RWYM™ coaching. 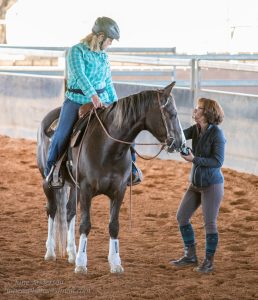 Ann teaching a student in Australia

Early in 2017, I upgraded to a RWYM™ Level 2 Mastery coach.  As well as giving regular lessons, I also delivery RWYM™ clinics in Perth, regional WA, QLD, the NT and New Zealand.

In 2012 I qualified as a Neuro-Linguistic Programmer and I am now able to incorporate this powerful skill into my coaching and clinics.

I feel that NLP and RWYM have given me a unique ability and set of skills to assist the people I work with to achieve their goals and become the best that they can be. 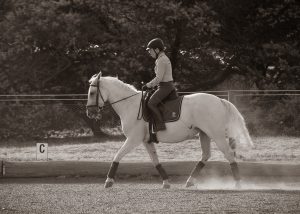 My horse horse Heidi who is the most generous mare, she is my dream horse. She has taught me less is more in my training, and riding.

Call or email Ann and ask for guidance based on your individual circumstances.